In 2007 the University of Arts and Design of Helsinki held an annual final exam exhibition "Masters of Arts".

"The Kingdom" was designed into this exhibition environment. It is an intentionally reclusive attempt to create something sacred and protected into an inconceivably incoherent context.

The main point was to have the actual artwork hidden from the corrosive glaze of spectators.

The work is in two different places:

"The surveillance room" is a lowered space with two projections and three monitors. From the video footage in the screens, the spectator is able to recognize a strange looking shack build in some unknown location. Cameras view this shack from different angles, some from inside.

"The Kingdom" is that shack house. It is built from driftwood collected from the beaches of city of Helsinki. Inside the house there is a shrine-like construction on a rotating plate. It consists of moss, rocks and a mummified squirrell. Specially controlled spotlights light the whole construction.

"The Kingdom" is study of reclusiveness and the conflict between personal and public. As you feel that the glazes of masses will corrupt and corrode things that you feel precious, why it is that you still feel the urge to exhibit those things so dear to you? 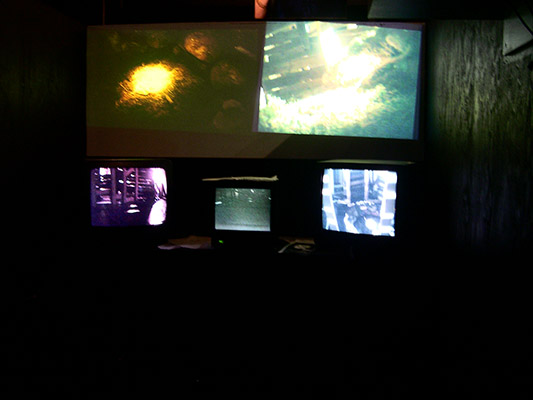